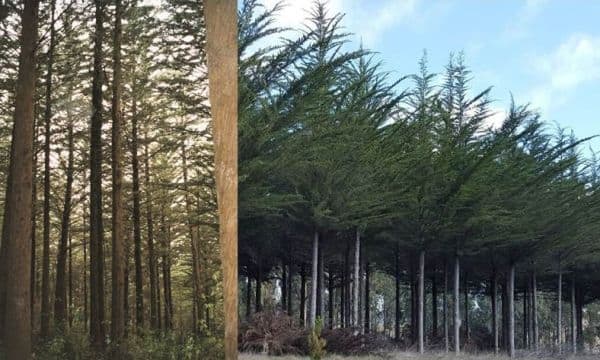 In general, cypresses are a versatile species group with proven performance both as a high value timber producer and as shelter species.  Their aromatic timber is very easy to mill, is stable, and has many end uses.  They grow best on moderately fertile, well-drained, sheltered sites, but with careful species and seedlot selection will perform well on a wider range of sites.  Proseed supplies improved seed of Cupressus lusitanica and C. macrocarpa.  C. lusitanica is more resistant to cypress canker than C. macrocarpa.

Cupressus lusitanica - Proseed now supplies improved seed from its Amberley orchard.  Previously, seed was collected from the best individuals within the top 32 of 108 families in a progeny trial established by Scion in Gwavas Forest. The trial there included selections from throughout the New Zealand landrace, from an earlier, smaller progeny trial, and from improvement programmes in both Kenya and Columbia.  Proseed’s orchard is established with grafts of the single best individuals from the top Gwavas families.  Further improvement of seedling quality can be expected from separation of these parents from lesser performing individuals in the originating trial.

Cupressus macrocarpa - Proseed now provides improved C. macrocarpa seed from orchards at Amberley as well.  The oldest orchard was established with the best individual from the best 32 of 156 families planted in a large Scion progeny trial at Strathallan in Southland. The families there were progeny from a mix of selections both from the tiny, natural population in Monterey and from the landrace already established throughout New Zealand.  Those selections have since been rogued and augmented after the Strathallan trial was reassessed with greater emphasis on resistance to cypress canker, to which C. macrocarpa is vulnerable, especially in warmer parts of New Zealand.

In 2018 Proseed is making a new "Amberley" seedlot  available from the New Zealand breeding archive also planted at Amberley.  Clones in this orchard are phenotypically selected for resistance to canker but are yet to be progeny tested.  Progeny trials will be planted in 2019.

This seed is available for sale on the condition that purchasers sign a contract to pay a royalty of 4 cents per propagule sold or used for personal use.  The royalties are to help advance genetic improvement and better understand cypress growth, siting and effects of silvicultural practices.