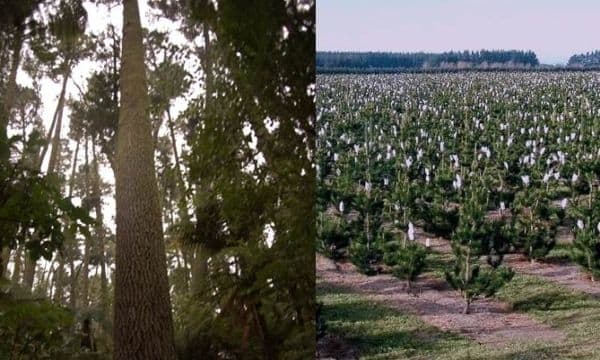 In 2018 the New Zealand Government embarked on 10 year goal of planting one billion trees, of which 30% will be plantation radiata pine. This is drawing to a close but in recent year's the steady rise in the price of carbon continues to put considerable pressure on Proseed's annual production. Nevertheless reasonable quantities of OP seed will be available.

Use the links below to navigate to sections providing a brief overview of the major classes of radiata pine seed, pricing and seed treatment advice.

In Proseed's CP orchards flowers are bagged to prevent pollination by wild pollen. Hand pollination is then undertaken with selected pollen only. Since both parents and their breeding values are known, the subsequent genetic worth of resulting seed can be more accurately predicted. Control pollination also allows Proseed to produce seedlots with special characteristics for customers, particularly improved wood properties and disease resistance to Dothistroma needle blight.

CP seedlots are registered under GF PlusTM and are rated for five traits:

Growth (Gro) - based on diameter. The higher the number the better the anticipated growth rate.

Stem Straightness (Str) - the higher the number the better the expected average straightness of the trees.

Branching (Br) - the higher the number the more multinodal the seedlot.

Dothistroma (DR) - the higher the rating the greater the resistance to Dothistroma needle blight.
Ratings for this trait are based on assessments of relative proportions of live crown in Dothistroma prone areas.

Wood Density (WD) - based on values for growth rings 6-10. The higher the number the higher the expected juvenile wood density.

Most CP seedlots are put together with emphasis on different traits depending on customer requirements. Typical seedlots are shown below:

Proseed's OP orchards produce seed from natural crossing of many different parent trees. While the identity and breeding value of each female parent is known, that of the male parents is less certain. Until recently OP orchards were rated under the GF scheme with the highest ranked OP seed being GF19. All  OP orchard seed will now come from new orchards established between 2007 and 2011. These orchards are not rated under the GF scheme as they contain a group of newer and better 2nd generation parents selected after the GF rating system was replaced with GF Plus. The new orchards differ from the older GF19 orchards as much more emphasis has been placed on wood quality when selecting candidates. Seed coming from these orchards will perform as well if not better than routine GF19 seed.

In 2008, in order to enable forest nurseries to meet demand for improved tree stocks of lesser genetic quality than control pollinated material, the RPBC  introduced a new brand of seed called "Stand Select". To qualify for the Stand Select™ brand and be certified by SCION's Seed Certification Service, seed must be collected by an RPBC shareholder in accordance with criteria that authenticate its source and the genetic quality of that source.  The nature of the material from which seed is collected (i.e., thinnings or clearfelled trees) is also identified on the associated seed certificate. As the original parents  parents come from the RPBC breeding programme the performance of resulting seedlings is expected to be superior to that of unimproved seed.  However, because there is greater uncertainty of exact parentage, the RPBC does not accord a GF® or GF Plus® rating.  Further, because of this uncertainty, performance of resulting trees cannot be accurately compared to other RPBC germplasm.

Proseed collects royalties on behalf of the RPBC to help fund radiata pine breeding. For the 2021 season the royalties are as follows:

The RPBC allows sale of radiata pine seed subject to the following conditions:

While the conditions apply to both OP and CP seed, only purchasers of CP seed will be required to sign a declaration confirming that they agree to theses conditions. CP seed cannot be released until this declaration is returned. Placement of an order is deemed acceptance of these conditions.

Germination of radiata pine seed can be improved with treatment before sowing. In our view a simple 48-hour cold water soak is the minimum germination treatment that should be applied. Radiata Pine seed should be stratified (chill at about 4ºC while damp) for at least 7 days and up to 3 weeks prior to sowing, particularly when using control pollinated seed. Note that these are recommendations only. Nursery sites vary considerably and nothing can substitute for local experience.

Radiata pine seed can be treated  seed with a fungicide/bird repellent (thiram-latex) for $6/kg. Note that long term storage of treated seed is not recommended as it may inhibit germination.

Numbers of viable seeds/kg for radiata pine vary from year to year. Generally the number of seeds should now be between  25,000-35,000 seeds/kg with viabilities in excess of 90% for OP seed and 85% for CP seed. A kg of seed will produce enough seedlings to plant around 18-20 hectares.